I’ve just noticed something. If you pick up just about any magazine type publication lately, it won’t take too much flipping till you are educated with “the new”.

Everything these days has to be labelled the new something or other. Forty is the new thirty. Kate is the new Diana. No reservations is the new only reservations. Beer is the new wine. Thyme is the new rosemary. Pale is the new tan (really??).Three quarter jackets are the new blazers. Croatia is the new Spain. Girls is the new Sex and the City. I could go on… but I really need to pee. END_OF_DOCUMENT_TOKEN_TO_BE_REPLACED

I got a little fashion lift-out thingy with the Sunday papers yesterday and I know I’m always a little slow off the mark with these things, but what I saw made me realise it’s time to bring out the “what the?”

What the hellllll is this homeless bum thing boys??

This is apparently not just trendy or cool, it’s risen to a whole other level of nonsensical societal labeling. I’m sure that’s not grammatically correct phrasage (and neither’s that) but I’m going with it. Apparently this look is hipster. 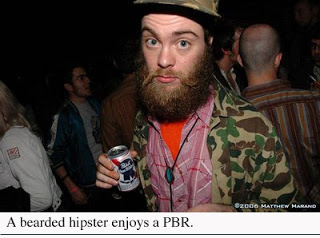 It’s even on the runways…

Ok that’s not a runway, but this is…

Famous people are doing it too…

Seriously… who would kiss that? Oh right… her. END_OF_DOCUMENT_TOKEN_TO_BE_REPLACED

Today I made another awful and all too frequent for my liking decision to attempt to go shopping. That’s twice this year. Uggh. But it was an emergency. I have my second photography job tomorrow and it’s a baptism, so I need to look respectable. Church respectable. Fark.

Anyway, excrutiating story short, of course the trip was not fruitful in any way that would help me tomorrow… but I did see this…

What the fugging fug? Ignoring the fact that it’s pink (vomit) is this what fashion has come to? It looks like a bath mat that someone has sewn a hood on and attached a zip to. Or should that be the other way around? Hood to, zip on? Whatever… who would buy this?

Now, at first I actually wrote that maybe these are the new uniforms for people who work in the toilets at nightclubs, that in a push for better tips they’ve taken to lying on the floor and literally letting people walk all over them. But then I had second thoughts. Too far you think? But what if I told you that I used to work in a toilet at a club, would that make it ok? Is there room for censorship in The Bum Diaries?

Oh you now what, it’s Friday. Here’s a silly fluff story instead. I probably deserved this for being in a McDonalds and I don’t know why it irks me so, but as I’ve said before customer service in the UK hasn’t been invented yet. Feel free to call me a hypocrite at this point though, because when I got treated badly in New York I wore it like a badge of honour, it made me smile, I gloated to my friends, hell I even wrote it on postcards “A New Yorker was rude to me, I feel like a native, I may move here!” END_OF_DOCUMENT_TOKEN_TO_BE_REPLACED

I’m the first to admit I’m pretty clueless when it comes to girly things (I only just found out what threading was a couple of months ago) but today I was well and truly gazumped. I snapped this quickly (notice the word quickly – this is to facilitate the thought process that this is such a terrible shot for a reason) from one of those beauty shop place thingos that most females like to empty their purses in.

Now I know what a Brazilian is and I know what a blow dry is, but if you put the two words together like that, I have no idea what the bloody hell you’re on about. I mean, once you’ve had a Brazilian, if they have the slightest clue what they’re doing there aint gonna be anything left there to blow dry. For some reason my first impression was that it was a kind of gangster slang, like Glasgow Grin, but I doubt you’d be able to advertise something like that so blatantly in the window. Maybe a small flyer in the back, yes, but the window???

So all the way home I thought about it and here’s the only three things that would make sense to me:

1) It’s ironic slang – it means bald men can have their head waxed there.

2) It’s a normal Brazilian but with the added extra of someone actually blowing on your giney until the pain of the wax strips goes away.

Fashion and me don’t get along. We don’t understand each other. It’s like the universe looked at me when i was a baby with my nappies hanging around my knees and granted us a lifetime divorce. Irreconcilable uselessness. So I have no idea why I keep on commenting on fashion when I have no aptitude or expertise on the subject. People who can’t do something well shouldn’t have an opinion right? But then what the hell would anyone ever talk about? We’re drawn to things we’re no good at, like me and fashion, and me and cooking shows and Madonna and acting.

I had to go shopping yesterday. I needed jeans. I only have one pair of jeans and those I bought four years ago. Two gaping knee holes and three crotch patch jobs later (don’t ask) I came to the conclusion they were now costing me more money to keep than it would be to simply buy new ones. Other than public speaking and giant reptiles, shopping is probably my biggest fear. Nothing ever fits, nothing ever looks good and no styles are ever “in” that I like. Why does everything have to have puffy sleeves, or diamontes on the bum and pleats in the front or be skin tight, cropped, jeggings, leggings, tapered, trimmed or friggin shimmering? Give me plain. Give me simple. Give me Amish for god’s sake. Well, actually no, I don’t like their stoopid hats.

So anyway, as if the mere burden of shopping wasn’t enough, the nightmare was made worse by, I swear, every single shop I went into (ok maybe not Boots) having a version of this… 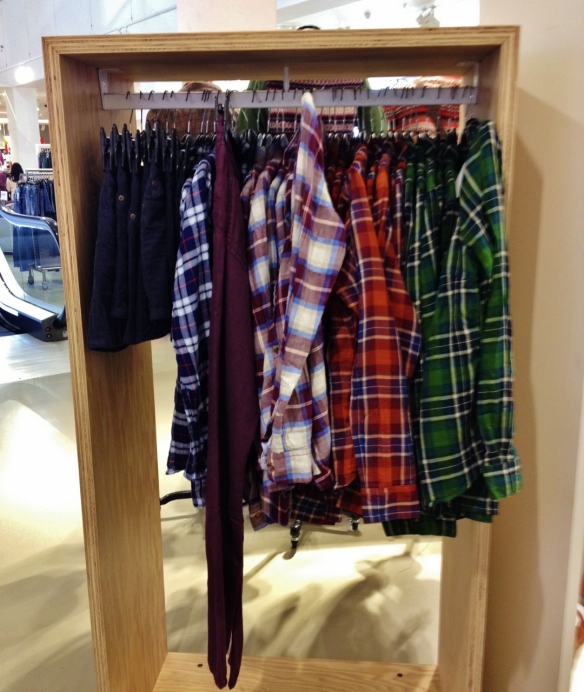 Ahhhhh. WTF? Flannelette shirts are back in? Oh god why??? Why why why must they come back every few years? They’re indestructible. If there ever is an apocolypse, it won’t just be cockroaches roaming the earth, it’ll be cockroaches decked out in flannel. END_OF_DOCUMENT_TOKEN_TO_BE_REPLACED

I don’t wear jewellery, no necklaces, rings, never had my ears pierced and I doubt very much I’ll take up the habit  of pinning jewel encrusted lizards or skulls on my extensive new polo neck collection when I reach 55. But I do wear wrist bands. Leather ones. And my favourite one died yesterday, well and truly beyond super glue repair.

This thing has been in my life for as long as I can remember. Well no, longer, because I can’t actually remember that far back these days. Strangely enough a friend got it for me at this little dinner theater place in Melbourne which does dracula/horror/”comedy”  themed gigs. Ohhhh bless. I kind of like that it started life in show biz.

Wristy Bandy was on my arm pretty much every day for the next bazillion years. Anyone who has ever met me on a day hot enough to roll up my sleeve will have seen it. So not too many in the UK then. It’s travelled the world with me, gone to work with me, partied with me and made some people wonder if I stole it from a cat or had a matching choker and accoutrements at home. Yeah good onya fellas. Hilarious.

So good bye Wristy Bandy. My morning routine will never be the same without you. It will however be ever so slightly quicker.

Have a dose of what life is really like living here – from my single-handed destruction of the Turkish language, random arguments with random relatives about everything from apples to vaginas to learning the secrets to making the perfect içli köfte! Highs or lows this is my observations from the melting pot of crazy that is my life in Mersin.

The Art and Craft of Blogging

Wake Up Your Luck
retireediary

The Diary of a Retiree

Family Holidays Queensland and Beyond

Stunning Photo Websites For You, Your Family, Or Your Business.

The Soul of the Heel: An American's Life in Puglia
What Did Nat think of it?
Loading Comments...