Jamie Oliver says so many customers at his Italian restaurants are stealing toilet fixtures that it’s costing him £30,000 a month to replace them. Really? Are you sure Jamie? I mean, I admit that when I first moved out of home most of my friends’ cupboards were stocked with assortments of glasses and cutlery they’d “gifted” to themselves whilst dining at the Hard Rock Café and TGIF (not me of course, I’d never do that Mum), but Jamie Oliver’s?

One would imagine, with his prices, the diners he attracts would be on a reasonable salary and of an age a few years beyond the need to cram three friends into a one bedroom flat so you can afford to eat more than cereal and packet noodles. For instance, for a grilled chicken with some herbs, Jamie’s Italian charges £13.25. Similarly, at his Barbecoa, a chicken breast with some corn and mushrooms is £18 (for that price, they’d better be coming from the Pamela Anderson of chickens). Hardly the stuff someone slaving away pulling beers at a pub will want to spend their tips on. So it makes sense to think that the people eating at Jamie’s are at the very least on a first-proper-job salary and have moved on to the years when you discover the delights and distresses of Ikea, does it not? 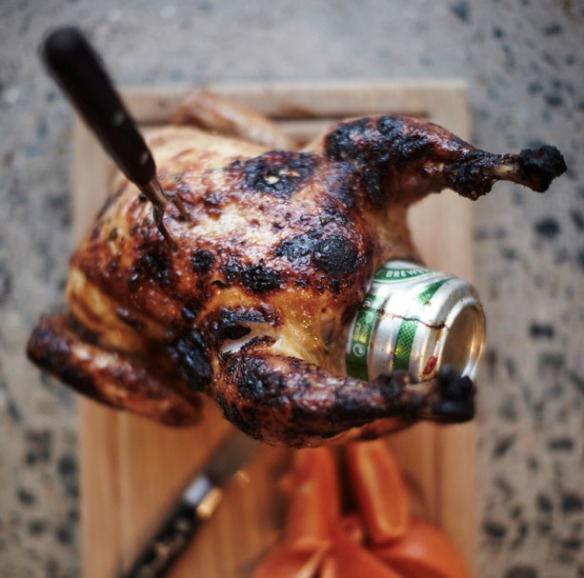 Maybe this iss why their chicken is so expensive… it’s self saucing.

The idea that Jamie Oliver’s clientele steals fixtures from his bathrooms just seems odd. He says they are designed by Thomas Crapper (no, really), are ultra-expensive and ok, maybe they are quite funky, but putting salary level demographics aside, how exactly do you steal toilet fixtures from a restaurant? Do you come to dinner armed with a shifting wrench and screw drivers? Do you just forcibly pull a toilet roll holder off the wall? Or is the real reason women take so long in the loo because they are struggling to detach the cistern pull from its chain? (they still have these in abundance in the UK)

And what do you do with the stuff when you get home? Do you suddenly start holding dinner parties just so you can gloat “The bathroom’s down the hall. Check out the right hand tap, I stole it from the Jamie Oliver’s. Next week I’m going back for the left hand one and a soap dispenser”.

No matter how I try to justify it, it just doesn’t make sense, and besides, there’s two other points to consider. Presumably there’s a finite amount of kit one can stuff down pockets and pants when emerging from a loo and not be caught out by tell-tale bulges. I mean I just don’t see any way you can shove a toilet seat down your pants and not alert the staff to your suddenly horse-shoe shaped backside. So that means multiple trips to fit out an entire bathroom. At £18 a visit for some plain old chicken, wouldn’t it be cheaper to skip the meal and just buy it online? But more importantly, if so many people are really redesigning their bathrooms, why am I not opening a plumbing store?

Have a dose of what life is really like living here – from my single-handed destruction of the Turkish language, random arguments with random relatives about everything from apples to vaginas to learning the secrets to making the perfect içli köfte! Highs or lows this is my observations from the melting pot of crazy that is my life in Mersin.

The Art and Craft of Blogging

Wake Up Your Luck
retireediary

The Diary of a Retiree

Family Holidays Queensland and Beyond

Stunning Photo Websites For You, Your Family, Or Your Business.